Pretoria’s legacy is steeped in political history which dates as far back as 1840 when the area was established as the first official migrant settlement in South Africa. Thirteen years later,  the two farms of Elandspoort and Koedoespoort were officially declared a town which later became known as Pretoria. As the town developed, so too did its administrative and political affairs culminating in the decision to proclaim Pretoria as the official seat of government for  the ZAR (Zuid-Afrikaansche Republiek) in May 1860. This growth spurt inevitably lead to the formation of schools, churches, a post office and a myriad businesses to service the city’s Afrikaaner residents. Over the course of the twentieth century, Pretoria continued its evolution as a city of civil servants and foreign diplomats, which it is still known for today.

Did you know? Pretoria is home to over 100 consulate offices, including the US and Chinese foreign embassies.

Despite its administrative functions, Pretoria is a diverse and culturally rich city that houses a plethora of museums and monuments. One such landmark is the State Union Buildings  which, throughout South Africa’s history, has played a central role in many of the country’s most historical events and milestones. Designed to mimic the ideals of an acropolis, the amphitheatre-inspired building was designed in 1908 by renowned South African architect Herbert Baker to house the administrative offices of the government.

Fact: The Union Buildings were completed in 1913 and were strategically built at the highest point in Pretoria as a symbol of unity and connection to the state.

On the 9th of August 1956, a stronghold of women from across South Africa joined forces and marched to the Union Buildings in protest of the amended pass laws imposed on black women. Attended by 20 000 protestors from all corners of society, the march was a major  victory for the advancement of women’s rights in South Africa acknowledging their role as an anti-resistance movement through visual propaganda, songs and slogans such as:  “You strike a woman, you strike a rock!” Fast forward to 1994 and on the 10th of May, the Union Building plays host to another major political milestone: the inauguration of Nelson Mandela – South Africa’s first democratically elected president who, 30 years before, was sentenced to life in prison at The Rivonia Trial which took place at Church Square just a few kilometres away from the Union Buildings.

Fact: In 2005, Pretoria was officially renamed ‘Tshwane’ – a Setswana word meaning ‘we are the same’ 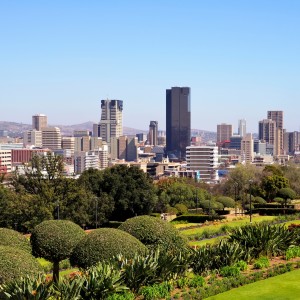 For three weeks every year, the streets of Pretoria are lined with lilac when Jacaranda trees bloom to signal the beginning of spring. The trees were brought to Pretoria from Brazil in 1888 and it’s estimated that there are now over 50 000 trees dotted throughout South Africa’s capital city.

Although the purple Jacaranda flowers soften the city’s hardy administrative exterior, Pretoria offers a vast selection of cultural and natural landmarks that make it an attractive place to visit year round. From the Museum of Natural History to Freedom Park which traces the history of South Africa’s liberation struggle, each museum contains its own unique collection of artefacts and memorabilia that tells the story of South Africa’s very layered and complex history.

Did you know? Freedom Park overlooks the Voortrekker Monument which is inscribed with the names of the people who lost their lives in South Africa’s major conflicts.

One of the most famous places to visit in Pretoria (and a must-do on any sightseeing tour of Tshwane) is Melrose House, a beautifully preserved Victorian home that was declared a national monument after the Treaty of Vereeniging was signed to mark the end of the Anglo-Boer War in 1902.

Looking for affordable accommodation in Pretoria? As one of the most premium Pretoria hotels, The Maslow Time Square is situated in the heart of Menlyn Maine and is the perfect base from which to launch your Pretoria sightseeing. Find more things to do in Tshwane here.

The time has come and the wait is finally over. After nearly four years in the making, Time Square is officially open. The second-largest casino in South Africa and the biggest development in the hospitality, gaming and leisure industry.